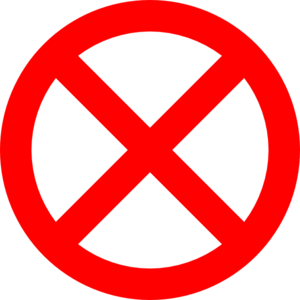 Look, I haven’t put up a post in over a month. Y’all are due some bad puns and a long post. Deal with it. 🙂

I don’t know about you, but my Twitter and G+ feeds are inundated daily with injustices and humanity’s inhumanity to humanity. It’s enough to make anyone – race, ethnicity, gender, whatever – want to burn something down, so when I see a chance to make some difference in my tiny little corner of this crazy universe, I gotta at least try.

One of these instances recently was PAX East 2013. I was going to be stationed at Indie Games on Demand running 13th Age, Dogs in the Vineyard and TechNoir (as it would turn out, mostly 13th Age). While one person can’t control the whole convention and what people say there,  sonuvagun MY table wasn’t going to put up with crap. I was going to have some kind of  sign or something to draw the line in the sand. I’d played maybe three convention games with strangers in my thirty years of life prior to PAX, none of which do I really remember, so I (probably with a bit too much gusto) went in expecting the worst.

During my investigations into tabletop tolerance tools, Quinn pointed me towards X-cards. You can read more about X-cards here and here but I’ll give you my short explanation as well. It’s a card with an X on it. That’s it. Done.  When everyone sits down to play, you hand out the cards and say (I’m abridging here) “if anyone says or does something that makes you uncomfortable, just hold up the card. No explanation necessary. We edit out the content and move forward, no big deal.” Why no explanation? Explanation reduces agency.

If agency and triggers and the like is old hat to you, go ahead and skip the next few italicized paragraphs. I write blogs as much for my own benefit as yours and I will come back and read this from time to time to refresh.

I’m a scientist. In my day job, I have to justify and explain everything. I need a solid rationale to back what I do and be ready to defend my work when auditors, peer reviewers and QA come knocking.  My documentation has to be written according to standards I did not devise and in a manner such that someone without my knowledge or experience could repeat my work.  It’s bizarre to me to specifically not require justification or adherence to some authority or another.  My religious background fuels this also, but that’s a different story for another time.

However, at the table if  you feel you have to justify your emotions or reactions to me, they’re no longer yours. They’re effectively mine.  I’m attempting to take away or override your control. If I don’t agree that thing A is uncomfortable and you can’t easily explain why thing A IS uncomfortable, I can walk all over you. In all fairness, let’s give me the benefit of the doubt. Let’s assume I’m asking because I’m legitimately concerned.  There are still the problems of:

No explanations. Flash the card, we respect it even if we don’t understand it, and off we go. If I want to ask you why later maybe I will, but you still have every right to say no or tell me to go do some fricking research already.

I took my X-cards to PAX and used them a few times. Many of the groups I ran demos for all knew each other, so I didn’t pull the cards out in those cases. Should I have? In hindsight, maybe. You never know what future issues you will never see might be averted by creating awareness in an already safe situation. I don’t feel bad about it, but if today were the Friday of PAX, I’d do it differently. Two points where they did matter worth talking about:

I don’t hit many conventions. I do PAX East and the Escapist Expo. I might make it to ColossalCon up in Sandusky in June this year maybe. When I go, my X-cards will go with me. They can go with you as well. There are PDFs below for X-card and O-card templates. (O-cards are “This is important to me. Can we explore more?”) There’s also a foldover sign with a script for explaining X-cards. (Art by *iara-art of deviantART) Take them and do good.