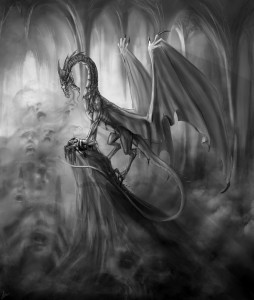 Some of you may be familiar with my failed project of the Worldbreakers (Never heard of the Worldbreakers? Check out my old site… ).  I left that mostly behind with At-Will, but I’ve been playing a lot of 13th Age lately.  I’ll talk more about why this is the game that fans of pretty-much-dead 4e fans really should play later, but for now I just want to share a little rendition of a classic Worldbreaker monster for you, rendered for 13th Age.

I realized that Worldbreakers actually have better hooks to do the things that I want them to do in 13th Age.  We lose precise tactical movement but guess what we don’t need? Precise tactical movement. Worldbreaker fling you across the map, make impossible leaps, tear the earth asunder….it’s actually easier to describe this with a loose system than it is a tight system (though describing it well in a tight system is very fun and a good challenge). I’m going to share with you Etherkai’s story, and you can get the playtest PDF here.  If you want to playtest and offer feedback, that would be awesome!

Does this mean that Worldbreakers are back? Maybe?  If Worldbreakers become some sort of product, anyone who was on my failed KSer is first on the list for what it comes out to.  Right now, I don’t know.  13th Age looks like it it will be way friendlier to 3rd party creatives, as does its community.  Right now I think I’m just going to have fun, and I’ll share my fun with you as I do it.

The dragon Etherkai commanded incredible psychic and draconic powers, which led him to believe he would inevitably rule the underearth. This belief led him to the path of the conqueror, and he used his powers to subjugate many lesser beings. The conquests came quickly and easily, and soon his holdings were vast

His arrogance grew just as quickly as his empire and after many decades, conquest bored him. Once, food and cruel amusements were enough, but now Etherkai craved his followers’ adoration. He wanted them to worship him as their god.

Etherkai ordered them to open temples and hold services in his name. He then proclaimed himself the God of the Long Night. Thinking his worshippers were convinced of his divinity and in his thrall, Etherkai fell into a false sense of security and relaxed his grip on his empire.

With Etherkai’s guard down, his people searched the vast caverns of the underearth for a savior and they found an altar to a forgotten god. Desperate, they offered small sacrifices and offerings and in return they received small miracles. Old wounds the dragon had dealt them were healed, sight was restored to the blind and aged limbs were given youthful strength. This small god—his followers came to know him as The Chained God—was just as cruel as Etherkai, but his divinity was real. More importantly, the Chained God knew something Etherkai did not: a god can terrify and punish and take anything it wants…except its worshippers’ faith. Faith only comes if you give something to your worshippers they cannot find anywhere else. The Chained God was cruel, but not arbitrary, and he could show restraint while Etherkai was wanton and indulged his whims for violence and blood.

The Chained God gained followers quickly, trading power for worship and obedience. Soon, he asked them to trust in him. He would lend them his power, and they would use it to depose the fake god, offering as tribute Etherkai’s body and mind to the Chained God for eternal torture. When Etherkai next came for his tribute, he found rebellion instead and the would-be god’s people wrapped him in chains of bewitched metal, dragging him to the temple of their new lord. That day, Etherkai’s torture at the hands of The Chained God began. It did not end for more than a hundred years and the dragon’s screams filled an area of underearth soon called the Howling Caves.

It is unclear how Etherkai escaped, but the effects of his torture are obvious: countless wounds, burns that refuse to heal and a hyena-like cackle that is an audible image of his broken mind. He roams the underground realms, his quest for revenge against The Chained God and his former worshippers holding his broken mind and broken body together and moving them to action. When that ambition is frustrated, he bides his time by sharing his pain and insanity with any unfortunates who cross his path. Those who know of Etherkai speak of a mad dragon whose warped psychic powers tap into a realm of distorted dreams. Living on the verge of death and completely insane, he is the Nightmare Dragon. When he awakens, his cackle echoes through the underground realms.