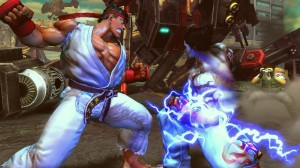 I love fighting games, and I know a lot of other people do too.

Or, I know a lot of people want to love fighting games.  But most people don’t want to train for hours and hours just to do the basic moves and then practice hours more just to approach competence.  To most hardcores, the execution of these arcane patterns is the core of fighting game activity.

I’m not going to argue against skill-building, because I enjoy that. But I think that combos and move execution are just one part of the genre, while the greater aspect remains free of the burden of the purely physical: the art of reading.

The beauty of it is that your foe is doing the same thing to you at the same time.

Consider a strictly equal game of RPS with clear payoffs. We’ll play 10 rounds of the game, with a $1 bet on each round. Which move should you choose? It makes absolutely no difference whether you choose rock, paper, or scissors. You’ll be playing a pure guess. Since your move will be a pure guess, I can’t incorporate your expected move into my strategy, partly because I have no basis to expect you to play one move or another, and partly because I really can’t have any strategy to begin with.

Now consider the same game of RPS with unequal (but clearly defined) payoffs. If you win with rock, you win $10. If you win with scissors, you win $3. If you win with paper, you win $1. Which move do you play? You clearly want to play rock, since it has the highest payoff. I know you want to play rock. You know I know you know, and so on. Playing rock is such an obvious thing to do, you must realize I’ll counter it ever time. But I can’t counter it (with paper) EVERY time, since then you could play scissors at will for a free $3. In fact, playing scissors is pretty darn sneaky. It counters paper–the weakest move. Why would you expect me to do the weakest move? Are you expecting me to play paper just to counter your powerful rock? Why wouldn’t I just play rock myself and risk the tie? You’re expecting me to be sneaky by playing paper, and you’re being doubly sneaky by countering with scissors. What you don’t realize is that I was triply sneaky and I played the original obvious move of rock to beat you.

Sirlin is smart about this stuff. As he lays it out, once you know my outcomes/payoffs, and once I know that you know, our lives become interesting.  In real time we are engaging in a dance, jockeying for position to control space and see who will truly punish who with a good counter. On the tabletop we can see this at play with Yomi or Brawl.  Heck, one can make a pretty good argument that Magic the Gathering exhibits these same properties.

My entry into this territory is humble but promising. It’s called Dicefighter and how it was born was like this:  I was going over a hack for Don’t Rest Your Head (I will tell you more about that later), and the elegance of the dice pool system was just gnawing away at my brain.  At the same time I’d been thinking about fighting game strategy and how it is often obscured by execution elements of the genre.

The first draft was crafted up in a few minutes, and we’ve had a few playtests since.  We are always looking for more playtesters! The game is simple and fast, but not simplistic;  there are strategies to work out, and countering your opponent correctly is one of the core activities.  If you guess correctly while forcing your opponent into an error, you can score some pretty devastating hits.  All you need are some six-sided dice (multiple colors is preferred but it is manageable without) and a buddy!  Oh, you’ll also need the PDF. With a character like Brogue:

To be honest, nobody knows this guy’s real name.  How are often are you going to ask a man with hands bigger than your head “what’s your name?”  This 7 foot irish wrestler with the impenetrable brogue just goes with the nickname.  He seems amiable enough, but that only means he smiles and he suplexes a competitor into the dirt, or laughs heartily when he piledrives you.  But that’s the game sometimes, isn’t it? You get thrown headfirst on the pavement and a smiling red-headed giant is saying things you can’t understand.

why wouldn’t you want to try this game?

Would love to hear your thoughts if you play this.