Death by a Thousand Posts 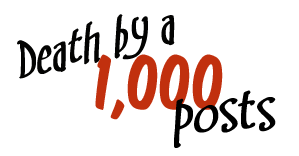 Here is a roleplaying game that you can play in a short period of time. In this fictional world you take the role of someone who is trying to win an argument on an internet forum of some sort. To play, you’ll need some four-sided, six-sided, and eight-sided dice, some sort of tokens, and some index cards. Like most games you’ll find on the blog, it’s something to playtest and try out.  If you try it out or have questions, contact us.

Depends on the players! Decide if your character wants to derail the thread, or make a good , long thread. If conflicted, split the group into posters and trolls, and go at it.

d4s are Fact dice. Use these to drive your point home, and to make truly convincing arguments. Facts are vulnerable to debating tricks and flaming, but when you get enough of them together, it becomes difficult to argue against you.
d6s are Debate dice. Debate dice allow you to control the structure of an argument. Debate dice aren’t as solid as fact dice, but they can allow you to muscle over basic facts, and sometimes redirect rage dice.
d8s are Rage dice. You can’t win an argument with Rage dice, but you can make everyone regret they were in an argument with you.

Each player gets 1 each of Fact, Debate, and Rage dice (a d4, a d6 and a d8). In addition, each character can pick two dice of any type. This could be two extra fact, or two debate, or 1 debate and 1 rage. Once you pick your dice, place them behind your handle.

Last, give each player some index cards and a writing utensil of some sort.

When you make the first post on a thread, are making one of three basic thread types:

Education: “I am going to teach you something about X.” Write a short sentence or phrase about some topic on your index card. At the bottom write your handle, the “Fact”, then roll yourfact dice. total up your ones, and put the sum after “Fact”.

Start a Debate: “What do people think about this?” Write a short sentence or phrase about some topic on your index card. At the bottom write your handle, then write “Debate”, then roll your debate dice. Total your ones and put the sum after “Debate”. For every 6 you roll, choose someone to get an extra rage die.

Tear Something Down: “I hate this thing!” Write a short sentence or phrase about something you can’t stand. At the bottom write your handle, then write “Rage!”. Write the number of your highest die after it.

The rest of the game is about responding to posts. To respond to a post:

Roll your dice. You’ll use these dice to see what response you can give. All posts must respond to another post, even if the post is a non-sequitir.

Pick one type of die that can make a valid post with it. You can attack, support or derail another post. All posts should be numbered in the order they appear in the thread.

When you attack a post, put a mark on the attacked post, then write a short sentence detaliing how you attacked the point. If a post has three marks on it, it is discredited and the creator of the post immediately loses a die. Discredited posts cannot be attacked, derailed or supported. On your post, write the die type used. Your post strength is equal to half your highest die. write that number next to the die type.

When you derail a post, take some detail (imagined or otherwise) from the post you are derailing
and then change the topic. Split the strength of the post in half, rounding down. Your post strength and the derailed post strength are equal to the halved value.

To make one of the post types, you must choose on die type from what you rolled, and exceed the post strength of the post you wish to attack, support, or derail.

If you use fact dice, you can add the two highest dice you rolled together for a total. For an attack, halve this value. For derailment, use the highest and lowest die. Any 4 you use with fact dice is removed.

If you use a debate die, only use one die. Any debate die that rolls a 6 is removed, and you can give someone else a rage die or a fact die. In a derailment, double your debate die (a roll of 6 is still removed)

If you can’t make any valid posts, remove one die of your choice from your total, and change a die from one type to another if you wish.

Running out of dice.

When you have no dice, you are out of the thread.

The game ends after twenty posts are reached (“good thread!”), when only rage dice remain between all posters (“flamewar”), or when all posters run out of dice (“boring thread”).