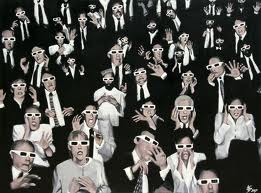 RPGs are stories you play while you watch

Habit #7: Be a Player and a Member of the Audience

The last habit is more of a consideration, but even in that role, I can’t emphasize enough how important it can be for your game!  RPGs when they work best are games that watch at the same time you play them. I won’t maintain this situation is totally unique in media, but I do think it makes RPGs pretty special.  I want my players to keep this knowledge at the top of their mental checklist for several reasons.

The first: let’s keep RPGs about our enjoyment as people.  We can argue that the work of acting a character perfectly or scoring the perfect combo/death technique is the most thing an individual player can do, but when you are thinking of yourself as an audience as well as a player, would you want to watch someone hog the spotlight or hold up a game for a half-hour while they indulge themselves in something only they enjoy? The player in us doesn’t care; performance at all costs!  But thinking about your game through the lens of an audience, as someone who wants simply to revel in what happens, you might look at it another way.  Do you really want the story you are telling to be about rules loopholes or “solo” play? There are no right answers, but when you think through this lens you can at least make that choice explicitly.

Second: I’m hoping if you can think of what you want to see and experience in a game, you can think about what others might want to see.  You don’t have to give over to their concerns, but when you take or respond to action it can guide you towards creating an experience more interesting for the table. If we are all watching a movie, maybe you don’t make too much noise because you are part of that community of people watching the movie at that time, and want to be considerate of your fellow movie-goers. In the same way, being part of the group that is playing and watching the fiction in your game deserves some consideration, whether it’s you paying attention to other people’s turns or just giving other people some space.

The last reason I consider the most important: considering your role as audience and player lets you make “meta-gaming” something better than a dirty word.  From sharing your character’s thoughts to scene framing to the sheer enjoyment of entertaining other people, understanding your role as an observer lets you go all Heisenberg on your game, transforming your experience simply by being an active witness to it.

To me, RPGs aren’t about winning.  They are not about me as a GM creating a story for you to walk through and they are not about random actions and displays of system mastery.  All these things can happen, but what is most important to me at the table is for players to make decisions with enough distance to watch the fiction and to be horrified/amused/elated/shocked at the feedback when other players make their decisions.

Roleplaying games are at their best when we enjoy their bizarre alchemy of inside/out,  fiction/reality, competition/collaboration. Embracing your role as a contradiction of participant/observer puts you right in the middle of this, and all the joy it brings.

I hope you enjoyed the series! I’m not trying to spread dogma, but I do want to share my personal desires for  role-playing, and what I attempt to encourage in my games.