You Enter a 10×10 Room: Thoughts on Description 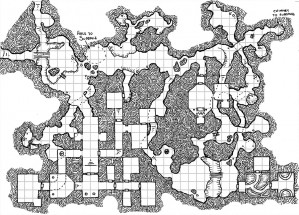 I just got done running 5 sessions of an incredible Tenra Bansho Zero game (I’ll talk more about this later, but check out Chris’ post if you want to know why Tenra rocks). I thought I did an OK job on the GM side of things, but one thing I wanted to do a little better is tweak how I describe things. I don’t think I am bad at it, but I do want to improve. When I’m looking to improve some skill, my normal approach is to first look at the things I don’t want to be doing. What do I want to stop or cut out?  For starters:

No more trying to sound like read-aloud text. I really don’t like read aloud text that much, though I’ve certainly written it for products and certainly used it in the past. One reason I don’t want to ape that style is that I run highly improv games that don’t give me time to deliver honed sentences,  so I’m emulating a formal style that I can never truly prepare for.

Talk too much. This sometimes goes with trying to sound like box text, but most of the time it is the result of not having a structured way of describing scenes or action. I hate that feeling of me rambling on and on trying to describe a sequence of events because I don’t have a good way to shorten the description.

Avoid cookie-cutter approaches.  Whatever approach I choose must be easily varied. I can’t follow a script that says “include this, then include this” because that will get boring for everyone really fast. I want structures, not scripts.

When I first described my need to improve, it was suggested that I offload description to players.  I try to do this as often as I can, but also feel that I need to do what I can to establish a model that players can follow. Otherwise players can fall into the pitfalls I listed above! The flow of a game is so important to me that I want to preserve it no matter who is doing the talking.  I’ve found that if I develop good structures and model them, then players naturally fall in line and we get everyone moving and flowing.

So, what do I want to see in description in my games?

Cinematic flow. Cinema has a rich visual language that you can borrow from.  In addition, everyone in your group watches movies and TV to some extent, meaning they’ve absorbed some of this language. Rather than describe like a book, I want to describe action like one would in a screenplay or a director describing a shot. I don’t want to double down on cinema jargon, but I do want to frame my description cinematically.

Incorporate reactions. One thing I thought I did well with one of the players was to incorporate her reactions into scene descriptions.  Her character was really tormented, so any scene that I thought  would torment her character, I would tend to take a moment to get the character’s reaction, which everyone really liked. I realize there are more ways to do this, and want to use that more to get a quick sense of a character’s reaction, “cutting” to their face as they enter a battlefield, or stumble upon a murder scene.

Instill a sense of wonder. Sometimes when describing, I’d trail off or not explain things.  What I noticed in these situations, was if the scene description was vivid enough, leaving something out, or explicitly calling out the unknown portion drew the players to it. That sense of wonder, that sense of “whoa, what’s going on here?” is something I want to capture more frequently with description.

If it’s not yet clear, I look at the act of describing action and scenes in games as a tool for player investment. The most important thing you can do in a game is get your players invested in what’s happening! Once you do that, common problems tend to resolve themselves, and you can focus on renewing and rewarding that investment, which is at the heart of what RPGs are about.

I’ll share more of my thoughts as I develop them on description, but in the meantime, share with me your thoughts about description.